Most of the major stock indices finished higher last week, the second week out of three. Is this the end of the beginning? The summer turn we typically see in midterm election years? We think not. Our checklist for bottom fishing remains far from complete.

Some bottom indicators are nearing capitulation levels, others are just giving summer boredom neutral readings. S&P 500 volatility as measured by the Cboe Volatility Index (VIX) remains well below capitulation levels and is in a short-term downtrend. Less than 5% of world stock markets are at a one-year low. The worry flag goes up when half the world’s markets are making new lows. Five-day price momentum is slowing but again remains above bottom levels. A quarter of all global stocks are above their 200-day moving average, versus a 10% bottom level. Depending on your view, we either need to plumb the depths of the Bear and get it over with, or stocks should muck around back and forth for a few more months.

Which view prevails depends on your WIFE data. In increasing order of importance: war, inflation, Fed and earnings. This week starts our favorite time of the quarter: earnings season. Normally the best performing six or seven weeks of a quarter, this season comes with a big load of hand-wringing.

Economic data downshifted last quarter, and companies began guiding earnings estimates lower. Wall Street analysts were slow to respond to the slowdown but have been rapidly cutting estimates for the last three weeks. For most of the year, their projection for the S&P 500’s earnings per share growth centered on 11%. Based on company guidance and the economic news, 5% to 7% is more realistic. Strip away the Energy sector and 2022 earnings growth could be as low as 3% over 2021. Earnings season traditionally kicks off with the big banks. JP Morgan and Morgan Stanley report Thursday; Bank of America, Wells and Citigroup follow on Friday. The “season” starts earlier as a few companies report before the big bulge at the end of July and early August. During that two-week period, as many as 200 reports per day will hit the wire from microcaps all the way to Apple. To date 18 companies from the S&P 500 have reported and 13 of those have beaten expectations. That is right on track percentagewise with the earnings rebound since the end of shutdowns in 2020. Of the 18, 11 cited labor costs as their biggest concern, followed by Ukraine, lockdowns in China (supply chains) and rising interest rates.

One interesting point from Bespoke Research is about analyst earnings estimates. When analysts lower their estimates for the four weeks heading into the reporting season, the S&P 500 usually rallies through the earnings season. In other words, analysts routinely mark earnings estimates down so far that they represent a low bar for companies to jump over. In the 53 quarters since 2008, Bespoke found that in the 13 quarters that analysts marked down their estimates more than 15% (like today), the S&P 500’s median performance during the following six weeks season was a gain of 3.7% with a 77% (10 of 13 cases) win rate. OK by us.

Earnings is the mother’s milk of stock returns. In turn, growing earnings and dividends are the key to long-run investor returns. Our Base case for 2022 is now our High case. War, persistent inflation into next year, and Fed looking backwards and missing the slowdown are headwinds to better earnings.

High: Earnings surprise year-over-year with a 10% gain. Employment holds steady and inflation continues to moderate toward 5%. Stocks hold the June 16th low and muck around sideways for several months rebuilding energy. The Fed slows its rate increases and halts at 3%. By late 2023, 2022 appears to be merely a mid-cycle slowdown. 20% odds

Base: Earnings slog through the second- and third-quarter slowdown to a flat reading. Stocks look for new lows over the next several months. The Fed continues to push rates higher to an overnight rate of 3.5%. Inflation stays above 6% well into 2023. There is a 50% chance that a mild recession starts near the end of the year. 60% odds

Low: Earnings dip negative for the second and third quarters. Supply chains, especially trucking, continue to plague companies. China resumes wide lockdowns to counter the BA.5 and new BA.2 variants. The Fed pushes short-term rates above 3.75% regardless of the direction of inflation. Recession starts in the fall of this year and does not abate until mid-2023. 20% odds

Interest rates have bounced higher over the last few days along with the dollar and stocks. We do not see a major trend change in any of the asset classes in the very near term. Earnings and statements about their outlook from company management will likely affect investor sentiment and valuations in the coming weeks. Our indicators are keeping our allocations neutral and cautious.

When does 95 degrees feel cool? After the sun has gone down and it has been 105 degrees all day. Is it worth it to deal with July and August in Texas to avoid winter weather in January and February? Depends on your perspective. I usually only like cold temperatures when there is a mountain to ski down, but I can do snowshoes and cross-country skiing also. In the heat, not much you want to do outside, so mostly inside activities, especially before it gets dark out.

My hottest summer job was working for the Parks and Recreation Department in my hometown. Tree crew, mowing, park cleanup and occasional trash duty made for leaving my clothes outside when I got home. The Nonfarm Payroll number was hotter than expected, at least on the surface. Employers added 372,000 jobs in June, higher than the expected 273,000. Unemployment rate also continues to look good, staying at the historical low of 3.6%. If you look behind the numbers here, you get a different view. The participation rate fell to 62.2%, down from expectations of 62.4%. This does not seem like a big change, but it is showing you that people are leaving the workforce, and new workers are not there. Some might say this is a generational trend and that “young” workers do not want jobs, but you are seeing this trend in both older and younger demographics. 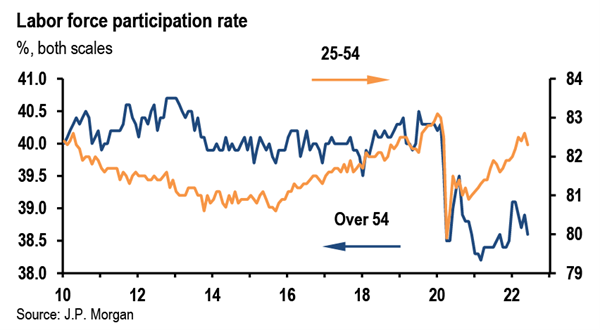 The other employment release this week was the Job Openings and Labor Turnover Survey (JOLTS), not to be confused with the caffeine/sugar infused cola (Jolt). This showed there are still over eleven million job openings. What is wrong with this picture, people are worried about a coming recession, but there are jobs out there!

You are starting to hear about layoffs in a few cases due to slightly slowing economy; but based on the numbers we have seen this week, the labor market is not cooling off as the FOMC would like.

As you know, the FOMC is currently fighting inflation and will continue to do so through increasing short-term rates and their “talking heads” spreading the message. These releases will not slow them down from raising rates, as available jobs and fewer laborers could play out in wage inflation. The current expectation is for them to increase the Fed Funds rate by 75 basis points (bp) in July and another 50bp in September.

As you can see above, there is still work to be done by the FOMC to conquer inflation. Futures expect them to be at 3.50% by Q1 2023, up from 1.75% now. Look a little further out, recession conditions will cause rate cuts by mid-year. This could be a very quick cycle.

The chill was felt in the bond markets as 10-year UST rates dropped from a peak of almost 3.50% on June 14 down to a low of 2.81 on July 5. Recession was the word. Since then, you have seen rates creep back up, based on some better-than-expected economic metrics. So, the inflation witch may not be dead yet.

One area that has benefited from recent conditions is the municipal bond market. States, public entities and utility districts continue to put money to work. Rates are up at levels not seen in ten years, and if we are close to the peak in longer term interest rates, the timing is great. Most bond funds have seen outflows as prices have fallen, and the municipal market is no different. At higher rates and lower prices, a buying opportunity is at hand.

A recession will bring lower long-term rates and rising prices. As in any investment, credit is key, so you must have the due diligence to look at the demographics surrounding municipalities. Are they in a growing, vibrant area of the country/state or in a declining region? For example, the net outmigration of income from Cook County (Chicago) is the same as Massachusetts, New Jersey and Connecticut combined. Wow! Do your homework.

Can the FOMC navigate this constantly changing economic environment and make the proverbial “soft landing”? Only time will tell. While futures and markets portray a longer-term view, they can revise their view in a heartbeat. While many want big actions from monetary and fiscal policy, slow is usually better. A gradual approach will take into consideration how things are changing, and adjusting the plan is an important part of the journey. Timing of the actions is the FOMC’s biggest challenge, as they are behind the curve for inflation, especially if we continue to see stronger economic growth. Stay tuned and stay with the long-term view.

The summer heat will only be with us for a few months; before we know it, jackets and hats will come back out. Put on your sunscreen and enjoy the time. This too will change.