Impressive daily volatility; but in scale a fairly normal correction.

The S&P 500 notched its fifth week in a row of losses, thanks to more Powell Pain and a growing Wall of Worry. The big index and its mid- and small-cap brothers are all down 10% over those five weeks. Despite growth-oriented tech stocks making up the largest portion of the index, the value and defensive sectors have held up the main index. Utilities, consumer staples and materials are down substantially less than the averages. The star this year remains companies in the energy sector, up 49%. That is due more to supply shortages and reopening than an ongoing war premium.

The Nasdaq is 16% lower over that time frame and emerging markets are 12% lower. There are parts of the Nasdaq where one does not go without protective gear. About half of the index’s stocks are down at least 50% from their highs. Nearly 10% are down over 80%. Year-to-date, every major index except Large Cap Value ( -6.6%) is in correction mode.

What stands out to us in this correction is the intra-day volatility. Most corrections have two or three 1/2 or 1% down days as their “big events,” sprinkled over weeks of trading. Since April 22, the S&P 500 has experienced four days of at least a 2% move to the close. One of the drivers is dealer hedging of clients’ option positions. But moves of this size usually mark a capitulation or “blow off” phase where the last of the speculators throws in the towel. Instead, these big moves have been marked by fairly normal ratios of selling and buying. Volatility and breadth measures are slightly elevated but also not near capitulation levels. The weight of the technical evidence suggests more bumps ahead.

Breathless headlines announced last Wednesday’s rate increase by the Fed as the largest in 20 years! Yes, the half-point increase was a “big” jump. Since inflation has been mired in wonderful disinflation, falling for nearly 40 years, the Fed has been able to nibble rates back and forth in tiny bites. In the nineties the Greenspan Fed used three-quarters of a point changes with regularity. Paul Volker remains the king of increases. Deputized by President Carter to attack (real) inflation soaring into the teens, he led the Fed from 1979 into 1987. Volker knew that interest rates were far below inflation and had to rise to choke it off. Volker pushed through increases greater than 2% seven times from 1979 into early 1982 to get inflation under control. The biggest? A 5% whale in March of 1980, followed by a 4% increase in May of 1981. The risk, of course, was that high inflation and interest rates would tip the economy into recession. It did and made it tough for us recent graduates in the job market.

One could easily conclude that Mr. Volker was serious about tackling inflation. Chairman Powell has invoked Mr. Volker twice in recent speeches. Yet last Wednesday the FOMC voted for just a ½% increase. Granted, they had well telegraphed the move. But their rhetoric leading up to the meeting was quite hawkish and had traders very nervous about how far and how fast the Fed would move. In his press conference, Chair Powell intimated that three-quarters of a point increases were likely not to be on the table. Atlanta Fed President Bostic said this morning that the Fed does not need to move faster than ½% steps. In other words, the Fed will move very slowly to attack inflation.

The other shoe to drop last Wednesday was the Fed’s Quantitative Tightening plan. Letting bonds mature out of their portfolio pulls liquidity from the banking system. Wall Street was prepared for at least $1.1 trillion in runoff starting in June and was prepared for a higher number. They got the bottom-end $1.1, but with a leisurely three-month ramp up to that number. Over four years this reduction in liquidity should have a similar impact on the economy as a 2% rate increase. So that is 1% per year. Hardly threatening to the economy.

Markets climb a wall of worry, goes the old adage. The Fed’s raising rates too far / too fast may be turning to a more serious worry of too slow. The Russian war is going to drag on much longer than we anticipated. China remains all but closed due to port area lockdowns. We think their reopening efforts will include a massive spending program to get their economy back on track.

Lack of trade and shipments crimps supply. Unless inflation further curbs demand, be prepared for higher prices for longer thanks to a new round of supply chain headaches. We are impressed with the number of companies reporting that supply chains are less of a problem. Here’s to continued improvement.

Interest rates have scaled their own recovery wall over the last several months. Most sectors are at or near their pre-pandemic highs. Some areas of the bond market, particularly municipals, represent value at these levels. We believe much of the rate move is complete and if the economy does moderate in the coming months, more sectors will become interesting to us. Regardless, we welcome the higher levels as bonds can now generate more meaningful income.

April showers of lower stock and bond prices are not bringing May flowering returns. We share the concerns of Wall Street that the Fed just may not be as serious as we thought about taming inflation. The world’s largest commodity producer is fighting with a neighbor and the largest manufacturer is battling a virus. Despite the events and noise, earnings are holding up and the economy continues to grow above trend.

It pays the bills.

I have had the opportunity to have had some very interesting jobs over my career, starting with my paper route after school, to driving a truck for a sleeping bag manufacturer, to spending a month on a Japanese fishing vessel, to designing an exhibit for the Seattle Aquarium, to bartending, to managing the bank’s liquidity, to helping people reach their goals through investment choices. All have helped keep the lights on and some have been more fulfilling than others. Bottom line, persistence, hard work and great people to work with have made these more than just jobs.

You may see ADP on your paycheck, an abbreviation for the firm Automatic Data Processing, and they process many companies’ payrolls. They have their own jobs index based on the companies they work with. This report is usually lost in the noise as the BLS Payroll release happens the same week. ADP does not cover government employees and is also not a good proxy for the BLS payroll metric but provides good information.

On Friday, we had the much-anticipated non-farm payroll release. It did not disappoint, adding 428,000 jobs last month, topping estimates of 390,000. This is the 12th straight month of adding more than 400,000 jobs. The underlying economy is ticking along just fine.

The unemployment rate stayed at 3.6%, just above the pre-pandemic half-century low of 3.5%. Transportation and Healthcare industries led the way with Durable Goods manufacturing and Retail Trade right behind. Markets were closely watching the wage component and participation rate for further glimpses in the crystal ball.

Average hourly earnings on a year-over-year basis were unchanged and up 0.3% monthly. The market would like to see some easing of wage pressures but, given the continued growth in payrolls and the number of job openings, this could still be a way off.

As the markets are in the mode of looking for bad news right now, they focused on the participation rate which declined to 62.2% down from 62.4% last month. As you can see from the chart below, the potential workers under 24 and over 55 are dragging down the rate. Notable about this decline was that it was primarily driven by workers voluntarily dropping out of the workforce as opposed to discouraged workers leaving. Other demographic trends need to be watched here. 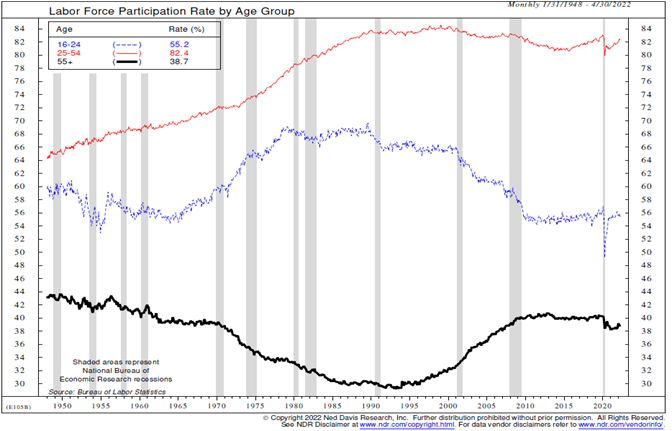 The Job Openings and Labor Turnover Survey continues to show a very high number of job openings in the U.S. Employers are having a very hard time finding new workers to fill vacancies. The workforce has changed since Covid, and this could be a longer-term impact than expected. More people have retired early, and this will not slow down with baby-boomers aging. What is happening with the under- 24 age group is a much-talked-about topic.

How much are you paid?

The Employment Cost Index (ECI) rose 1.4% in the first quarter, even with a negative GDP print. Sticky inflation is still a concern, as the FOMC has acknowledged. This metric is a favorite of the Fed and increased 4.4% year-over-year.

Unit Labor costs are another metric that is keeping inflation on the front burner of business and consumer concerns. In the first quarter of 2022, labor costs increased 11.6%, reflecting a 3.2% increase in hourly compensation and a 7.5% decrease in productivity. This is the largest decline in productivity since the third quarter of 1947. Is this a function of the work-from-home push, technology related or a changing labor force? We will watch this trend closely going forward.

One point to keep in mind is that wages may not be keeping up right now, but as these wages are more permanent and inflation is projected to moderate later this year, or early next, wages should catch up.

While a job pays the bills, it can be so much more. Finding the right fit for you and your employer is key. Find your job — there are many available — and make a meaningful contribution to this great nation.