Give us a break – less gamma and month-end buying.

Traders thought they had a Turnaround in play last Tuesday, pushed by Fed Chairman Powell’s comments at a Wall Street Journal symposium. The Chairman focused on the strong economy and, if activity did slow, the Fed would be flexible in how fast and how far it raised rates. Those encouraging words helped most U.S. indices post a 2% or better gain for the day. So far so good.

April data released in the ensuing days painted a picture of a growing economy that is already slowing. Home construction, builder and manufacturing firms’ expectations all turned lower. A closer reading of Powell’s comments revealed that the Committee would be willing to raise rates “past neutral,” which would be above inflation. Recent inflation readings are running north of 8%, which would be a big jump from today’s 0.75% Federal Funds rate. Worries shifted back to just how far the Fed would increase rates, and combined with a number of inflation-driven earnings misses, brought out the Bears for the balance of the week.

The S&P 500 has declined for seven straight weeks, falling 14%. Seven down weeks in a row is a rare occurrence, except for football fans in Austin. Bespoke Research found only four seven-week drops in the post-World War II period. The common thread to all four were concerns over the Fed tightening monetary policy (usually by raising rates) and possible recession.

“Peak inflation” is the popular narrative of the moment. Part of this argument relies on the fact that price increases should slow over the coming months because 1) several components, such as used cars, have rolled over and 2) smaller price increases later this year compared to last year’s big jumps. We were early adopters of this theme late last year. Unfortunately, continued supply chain problems continue to keep costs higher.

Fuel costs are higher thanks to a difficult exploration environment. Uneven recovery around the globe is pressuring diesel fuel supplies. Walmart, Kroger and Target all cited higher delivery, fuel and labor costs and missed analysts’ earnings estimates. We expect retailer earnings to be marked lower over the next couple of quarters thanks to a rapid buildup of product inventories that will be marked down.

Food costs in the coming months will also pressure prices. Ukraine is unable to get wheat onto ships and out through the Black Sea thanks to Russian warships. The government estimates that half of the usual crop will be planted this year. We are sure that number will change. India’s flip-flopping on wheat exports has also pushed prices to their highest in a decade. Here at home, Texas farmers will have few chances to benefit, as the drought in the Panhandle has wreaked havoc. “Most of them (wheat crops) will probably be totally abandoned…even up to 80 percent,” said Jackie Rudd, an A&M professor. Some Texas farmers do lock in prices this summer for delivery next year, so if the drought abates, they may see some relief in 2023.

After last week’s retail beating, we are glad earnings season is over. Usually when a company misses earnings estimates, traders punish the stock by pushing the share price down a percent or two. The company revises guidance and works with the analysts to get back in their good graces in subsequent quarters. Not last week. Walmart: down 11%, Ross Stores and Target: down 25%. Netflix, Dish, Amazon (!) and General Electric all fell by 10% on the day of their announcement. Almost sounds like a Memorial Day sale.

Despite the carnage in the retail sector, S&P 500 earnings fared well in the first quarter. 474 companies have reported through Friday, with 78% beating estimates. Earnings per share rose 11.1% over the first quarter of 2021, an above-average increase for this point in the business cycle. Top-line revenues increased 13.8%, also above average.

China’s lockdown war against COVID will impact earnings and margins of companies doing business there this quarter. Taiwanese export orders fell 17% in April from March levels. A portion of their activity is with locked-down China, but their export orders are a bellwether for global activity. We will let the first quarter dust settle for a couple of weeks before putting a pencil to the second quarter.

Last Thursday’s dip below 3,900 brought the S&P 500’s year-to-date drop within a percent of the 20% threshold for a Bear cycle. Down 17% for the year at this writing, the big index is still in correction mode. A global slowdown led by Chinese lockdowns, surging fuel prices and the Russian war has clouded the outlook for earnings.

When traders are uncertain of earnings growth and future costs, they tend to push share prices too far to the downside. We think this “growth scare” may take the summer to resolve in either direction. Inflation and earnings growth may be peaking now and slowing later in the year. If so, the first five months of 2022 will go down as a “growth scare” that was just cooling off from 2021’s fast growth.

Stepping back from the last four months, the S&P 500 has posted positive returns in 32 of the last 42 years and averaged at least a 12% drop during those up years. While 2022 is off to a rocky start, it is certainly not out of the norm. 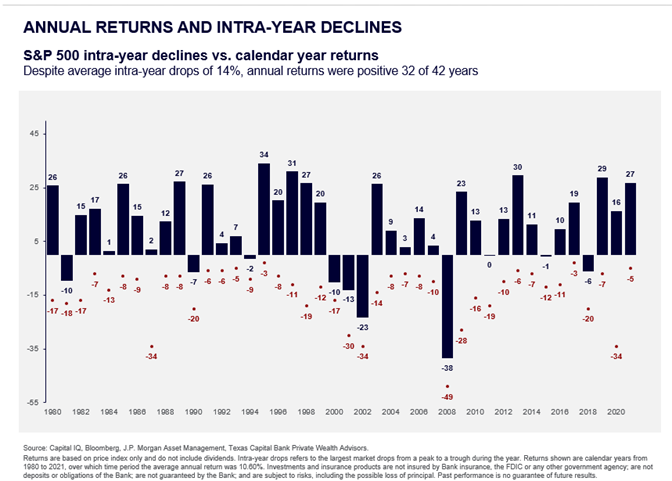 2022 is also a midterm election year. Fiscal stimulus from Congress fades during these years and this one is no different. The average drop during midterm years is 21% versus today’s 17%. Despite a grinding correction, the Long-Term Bull is bent, but not broken. Of the nine midterms that went on to post negative returns for the entire year, seven were already in recession. 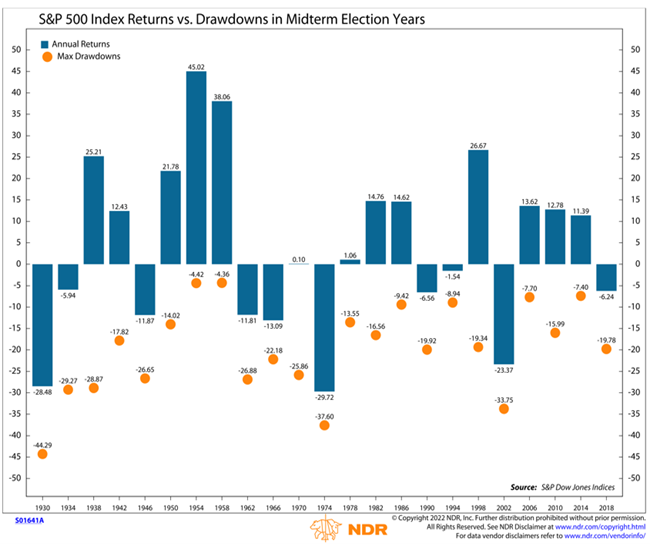 Monthly stock options expired last Friday, taking a chunk of hedging gamma out of markets. Let’s see if daily volatility declines this week. With the major stock indices down anywhere from 5% to 9% and bonds about flat, there should be some rotation into stocks from rebalancing accounts toward month-end.

First quarter earnings came in above expectations and historical averages. Companies that projected higher costs and were stuck with inventory were severely punished. Interest rates have come down a third of a percent since early May, reflecting lower growth concerns. The economy should grow above 2% this year, still above its long-term trend.

Graduation time of the year! Whether it is high school, college or kindergarten, it is an exciting time, putting a finishing touch on one segment of life before moving on to the next. It is a time of celebration for the accomplishment of completing a goal. This completion has prepared you for the next step. One of the most important things in life is to keep learning and keep moving/active. The markets are moving a lot lately and looking ahead for positive signs.

The Leading Economic Index (LEI) came out last week and had the first decline in three months. The biggest parts of the decline were in consumer expectations for business conditions and building permits. The pace of economic activity projected by this indicator is for slower growth, comparable to earlier in the expansion.

The coincident and lagging portion of this release showed increases in April, and the combination of these two also shows a reduced pace; slowest since March 2021. We are entering into a period of slower growth but compared to the faster rebound we saw last year; we are getting back to more long-term growth levels.

We started off the week with the National Association of Home Builders Index dropping to 69 from 77 last month. This indicator is weighted toward Present Sales at 59%, and given increasing mortgage rates and rising inflation, affordability is the primary concern.

Building Permits and Housing Starts both fell to five-month lows in April, although both are still above levels from a year ago. The immediate road ahead looks bumpy as building material costs are up 19% from a year ago and mortgage rates are at a 12-year high. We will see how high costs must go before demand slacks off, as people are still buying homes.  Existing home sales data showed properties only staying on the market for 17 days, the same as last month and a year earlier.

April Retail Sales metrics came in at or above expectations. Consumers are still shopping even considering the impact of inflation on prices. Real retail sales rose 0.6% for the month. On a year-over-year basis, the top performers were gas stations, food services and drinking places.

News from Walmart and Target this week showed consumers are buying necessities, yet the stores’ increased cost side hurt earnings. Labor and higher shipping costs are their top concerns.

While we are all experiencing higher prices in our daily lives, whether at the gas pump or the grocery store, the positive note is that while inflation is still growing, it is slowing down.

Weekly jobless claims have started to tick back up; last week was the highest since January. This could be an early indicator of easing in the job market, but it is still too soon to tell.

From anecdotal news, we have heard of slowing hiring at Walmart and Amazon, as well as some layoff news out of the Tech industry. We will see if this has some impact on the historically high JOLTS number in a couple of weeks. Right now, even if people are out of work, it is for a short period of time as the continuing claims number is still close to 1969 levels.

On a technical note, stocks struggle when Initial claims rise above their 26-week moving average, as you can see below. This could be one of the factors impacting equity markets.

All eyes are on the “talking heads” from the Fed until the next meeting in July. As inflation is the primary concern of consumers and businesses, they want to see commitment by the Fed to raise rates until the economy slows enough to stop prices from rising.

In the current economic environment, we are operating from a position of strength, as balance sheets are in great shape and people have jobs. As we see signs of slowing, will the Fed stop raising rates? They are walking a tightrope to fight inflation without stalling the economy.

Graduation is an important marker in life, a step along the way to the next adventure. While these are a big part of life, it is more about the journey between milestones. The economy is moving toward a valley, but the big picture still shows we have much to be optimistic about.